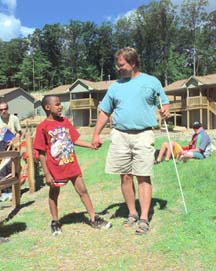 http://www.bearlakecamp.org/
The Lions Club's Bear Lake Camp has found a permanent home in Lapeer. The camp has moved three times since it was started in 1982 in Franklin. It moved to Altman, then to Oxford and finally to Lapeer. The camp can house up to 160 children and welcomes children who are visually impaired, hearing impaired, cancer patients and those with juvenile diabetes.

Who pays:
Campers attend for free, with all fees paid for by the Lions and Lioness clubs.